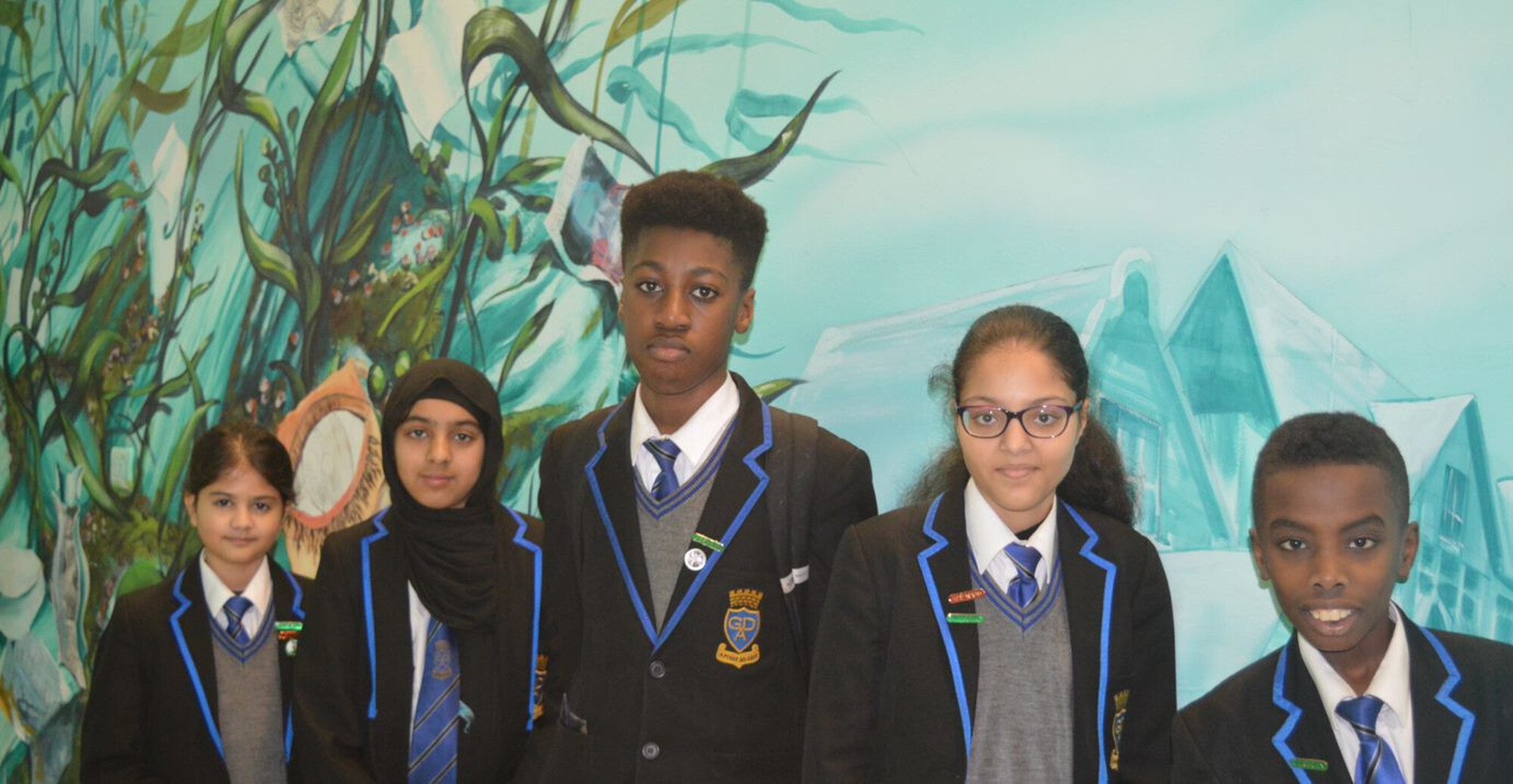 You can see the latest extracurricular timetable here.

01/21/2021
Year 7 Girls Football
On Wednesday 1st December 2021, Mrs Ratcliffe took 8 girls to West Bromwich Albion Training Ground (Anaya Ali, Altefa Abakar, Sana Faridoun, Natalia Holubora, Aisha Tanko Ibrahim Shaibu, Ruqiya Abbas-Bashir, Nusayba Fatima and Inaaya Sahangir). The girls played several matches against schools from across the West Midlands as a development program to help promote girls' football. A number of the girls already play for teams outside of school, along with attending the GDA football training Tuesday afterschool.
The girls played fantastically together as a team and represented GDA in a positive manner. We are very proud of the way they communicated during play, came up with tactics and strategies but always fist pumped the girls from the other teams at the end of each match to show their respect.
GDA 2 v 0 George Salter
GDA 2 v 4 Ormiston Forge Academy
GDA 0 v 1 Parkside

18/11/2021
Year 8 Football
GDA 8 v 2 Turves Green Boys (home)
GDA ran riot in the first 20 minutes of this game scoring 4 goals in quick succession and having 2 goals disallowed for offside. This set the precedence for the remainder of the game, truth be told, if we scored 16 it would have been a fair result. From start to finish, GDA dominated the game, created numerous chances and also defended incredibly well. Only bad luck meant that we did not have a clean sheet during this game. We are now through to the quarter finals of the Birmingham cup. Tougher opponents will come, but the boys WILL be ready!
Scorers: Ridwan (3); Abdeallah, Boubakari; Antonio; Corti (2)
Player of the Match: Antonio
17/11/2021
Year 9 Football
GDA 2 v 3 King Edwards VI Aston (home)
The year 9's played at home against K.E.A. in the U14 Aston Cup. A bright start saw Mujahid Noori open the scoring for GDA. K.E.A. equalised midway through the first half and it stayed like that until half time.
GDA were made to pay for several missed chances and two quick goals from K.E.A at the start of the half made it 3-1. A late goal from Mohamed Abdullahi 5 minutes from time made for an exciting finish but unfortunately K.E.A held on to win 3-2. A much-improved performance from GDA.
15/11/2021
Year 9 Football
GDA 0 v 9 Bishop Ullathorne (home)
The year 9 team had their first home fixture of the season against Bishop Ullathorne in the U14 West Midland Cup. It was clear very early that the opposition were very talented with their fluid passing and quality on the ball. Very quickly, GDA found themselves 1-0 behind and this was followed by a flurry of goals. At half time, GDA was 7-0 behind.
With the result already decided, GDA approached the second half with determination and resilience, working much better as a team and limiting Bishop Ullathorne to far fewer chances. The game finished 9-0. Hopefully our fortunes turn on Wednesday when we play K.E.A. in the Aston Cup.
10/11/2021
Year 7 Football
GDA 0 v 4 Ullathorme Catholic School (away)

The Year 7 boys were finally able to put their training sessions to good use in a match against Bishop Ullathorme Catholic School in Coventry. Tuesday 10th November when they played their first West Midlands cup match of the season. Mr Burgher is their coach alongside Captain Ricky in Year 11. The game was an away fixture on a full-size adult grass pitch - very different to training on a small 9 - a- side pitch.

George Dixon Academy played some fantastic football. There were a few great runs down the wing with crosses to players who ran on to the goal. Our keeper, Geshav, did some brilliant saves despite being under pressure for a lot of the game.

All the boys played and defended well on such a massive pitch, and it was heart-warming to see how the boys refused to give up and kept defending and working hard. Man of the match performances for Captain Amir and Peter Kasonga.

The final score was 4-0. Although it is disappointing to have lost the game, it was actually a very good experience, and the team is already looking forward to their next fixture. It is a pleasure to manage such great individual players who in turn make a superb team.

Thursday 4th November, another bitter and cold late-night to play football. Yr 10 boys played King Edward Aston in a double header, the Aston cup and Aston league, with the winner’s taking all points. GDA started off extremely well knowing that so much was at stake. GDA commanded the game, supported their teammates, and played some lovely football, it was a pleasure to watch. 15minutes of the game had gone, Wisdom scored his first goal, with his excellent footwork and his ability to find the back of the net. GDA were in total control, both attacking and defending. Captain Tayyub proved himself as being the captain, by directing and supporting his fellow players. Ali played superbly in defence, winning every challenge, Nathaniel and Neeraj both performed well. Mendel, Andrie, Alfa, and Matin, all played their part by attacking the ball and making some great moves towards the opposition’s goal. And providing the front two, Wisdom and Shadrach with quality balls to attack the goal. And attack they did, still in the first half and GDA were 2-1 up, once again Wisdom found the back of the net. Second half couldn’t come any quicker, GDA continued to outplay the opposing team, by scoring another four more goals. Mendel fired the ball into the top corner, Tayyub scoring a volley from a corner kick and, that player again Wisdom, who scored another two more goals. And finally, birthday boy Adnan, he had very little to do besides watch the opposition goalkeeper, retrieve the ball from the back of his net.

The game finished 6-1 to GDA, another tremendous win.

GDA played Plantsbrook in the 3rd round of the Aston Villa cup. GDA started off well, attacking the ball and providing some good passes and several shots on target, but they could not find the back of the net. Then disaster struck, a high ball was played in the 18yrd box and was greeted by a Plantsbrook player giving them a 1-0 lead into half time. In the second half GDA came back strong, scoring an equaliser which was scored by Wisdom. GDA took charge of the game, and a second goal was scored by Wisdom being in the right place at the right time. 16minutes were left of the game, I could smell victory, until we became too complacent. Plantsbrook scored again, it was now 2-2, then the final whistle was blown. The game had to be decided with penalties, GDA took their first penalty and missed, “Oh no” what a disaster, Plantsbrook scored their goal, giving them the advantage. The goals kept coming from both teams, all players penalties were mostly accurate. It was now 4-4, the opposition needed to score to win the game, thankfully Adnan, pulled off a superb save. It was getting down to the wire, with only a few players left to take a penalty. Alfa scored one of the best penalties I’ve seen in a very long time. GDA were winning 9-8 and it was up to Plantsbrook to equalise for the penalties to continue. The crossbar came to our rescue as a Plantsbrook player’s shot hit the bar and went out, making GDA victorious.

What a fantastic win, great determination by all players.

The Yr. 10's played their first football match against Aldridge school in the English School's football Cup competition. It was a cold and horrible day, as the rain flooded the pitch, and the wind took control of the ball. Our boys started off very well with some accurate passing and teamwork. The first half, GDA was leading 2-0, goals from Shadrak and Mendel, who scored a penalty. The second half began, it was totally different to the first half, their passing was not accurate, not challenging for the ball and no communication between players. Within minutes GDA was losing 4-2, their heads dropped even more, as the goals kept coming.

The whistle could not blow any sooner, the game finished 9-2.

Let's hope they learn from their mistakes.

An improved performance in which GDA narrowly lost 5-3 despite leading 2-1 and 3-2. Two late goals from Dame Elizabeth Cadbury Academy proved to be the difference.

Two GDA goals scored by Reuben and one from Mujahid.

Once again, the boy's represented the school and their families in an impeccable manor.

Away fixture at Colmers School in round 1 of the ESFA Cup. A performance that demonstrated 100 percent effort from the first whistle to the last. Despite losing 12-2 Mohamad Abdullahi scored two high quality goals. The first a composed finish from outside the 18-yard box after a defensive error from Colmers. The second a great header from a Mujahid Noori corner.

On a warm and muggy Thursday evening, after sitting on a bus for almost an hour, the boys were raring to go for their first ever game for GDA.

We started well and dominated possession of the ball creating 2 or three half chances. We did become a little complacent and sometimes lost the ball, but credit to the boys, they very quickly won the ball back. The only thing we did not have to show for our dominance was a goal. Half time was 0-0.

At half time we discussed about getting the ball forward more quickly and getting more shots on the goalkeeper. Despite doing this, we found ourselves 1-0 after a fortunate moment for Wiseman. The defence tried to clear their lines but the ball only fell to a Wiseman player who tucked the ball away. 1-0 to Wiseman.

GDA went straight up the other end and within a couple of minutes were level after a thunderous strike from Ridwan Sankaya. 1-1.

From this moment on it was all GDA, we created 5 or 6 clear chances with us drawing the keeper into a few good saves. It looked as though it would not be our day despite our dominance, but in the last minute a ball was fed to the left hand side where Corti Lita struck the ball from just inside the box. The keeper did his best but could only parry it into the net. The boys went wild knowing that they were just seconds away now from victory!

The full time whistle blew and jubilation began! Well done to the boys that played - a real team effort!

Player of the match: Devante Clarke